In his 2017 World Day of Peace Message, Pope Francis said, ‘today, sadly we find ourselves engaged in a horrifying world war fought piecemeal’. The 2016 Global Peace Index, the leading measure of world-wide peace, agrees with that assessment. Since the Index began ten years ago there has been a continual decline in global peace. While a few countries have increased their peacefulness, most, on average, have decreased by 2.44%. The Index measures peace internally and externally across 23 indicators. Some of these include: level of perceived criminality in society; number of homicides; number of gaoled people; ease of access to weapons and small arms; political terror scale; number and duration of internal conflicts; military expenditure as proportion of GDP; financial contributions to UN peacekeeping; relations with neighbouring countries; and number, role and duration of external conflict involvements.

The ten least peaceful countries in order are:

The ten most peaceful countries in order are:

Australia ranked 15 out of the 163 countries. On most individual indicators it scored in the more peaceful range, but on weapons imports it received its worst score of 4.2/5 which is towards the top end of the less peaceful range.  It is estimated that violence cost the nation US$ 48,743,952,074 in 2016. You can find the full details of the Australian study here. There is also an interactive map of the world where you can find out more about each country studied.

One of the most worrying pieces of data from the Index was the growth of the ‘peace inequality gap’, that is, more peaceful countries are growing increasingly peaceful but those experiencing conflict are continually deteriorating. This has been especially so in the Middle East and North Africa regions. These regions have a disproportionate effect on overall global peace levels, and have individually experienced the sharpest declines in peacefulness especially in Yemen, Libya and Bahrain. Unsurprisingly, Syria is currently considered the least peaceful and most dangerous nation on Earth. Globally, the deterioration of peace was largely the result of increased terrorism, which is at an all time high, and also increased political instability. Although terrorism is most acute in Iraq, Nigeria, Afghanistan, Pakistan and Syria the data shows an overall increase in its global spread.

The one major positive finding by the Index was a 12 per cent increase in spending on UN peacekeeping operations, which shows an improving commitment to this type of peacebuilding. Another positive was a decline in the number of external conflicts countries were involved in, though this was largely offset by the increase in internal conflict.

This short video provides an overview of the key findings of the Index. For a copy of the full Report click here.

What does this cost us?

In human terms the price of conflict on this scale is enormous. The number of battle related deaths is at an all time high largely because of the wars in Iraq, Afghanistan and Syria, though the numbers remain well below those of the 1960s and 1980s. The loss of civilian life, however, has grown exponentially not just in the last ten years but right across the twentieth century. In 1915 just 15% of all war-related deaths were civilians, but by the late 1990s that number was a staggering 90%. With the advent of the three above mentioned wars in the opening decades of the twenty-first century that trend has only increased. To provide a sense of the scale of recent civilian deaths:

Humans have paid and continue to pay too high a price for conflict in other ways as well. In any conflict people suffer from most if not all of the following: increased poverty, generational loss of education; loss of work; increased emotional and physical suffering; shorter life expectancy; very low to no access to healthcare; malnutrition and loss of a social welfare net due to the demise or decline of governance infrastructure.

One of the most appalling effects of conflict is the number of people who have become refugees or internally displaced persons (people who have no homes in their country but have not moved beyond national borders). That number is at its highest in 60 years and it almost doubled from 2007 to 2015. By 2016 it was approximately 60 million people. There are nine countries with more than 10 per cent of their population classified as refugees or internally displaced persons with Somalia and South Sudan having more than 20 per cent of their population displaced. Syria has the highest number of displaced people with a whopping 60 per cent of its population unsettled; that is about 11.3 million people (4.8million fleeing externally, 6.5 million internally).

In raw economic terms conflict is extremely expensive. It disrupts economies, destroys them in some cases, and conflict itself is expensive to fund. The Global Peace Index found that in 2015 the world collectively spent $13.6 trillion US dollars or $1876USD for every person in the world. That is 11 times the amount we spend globally on foreign direct investment – investment that funds improved development outcomes which directly correlates to improved peacefulness. 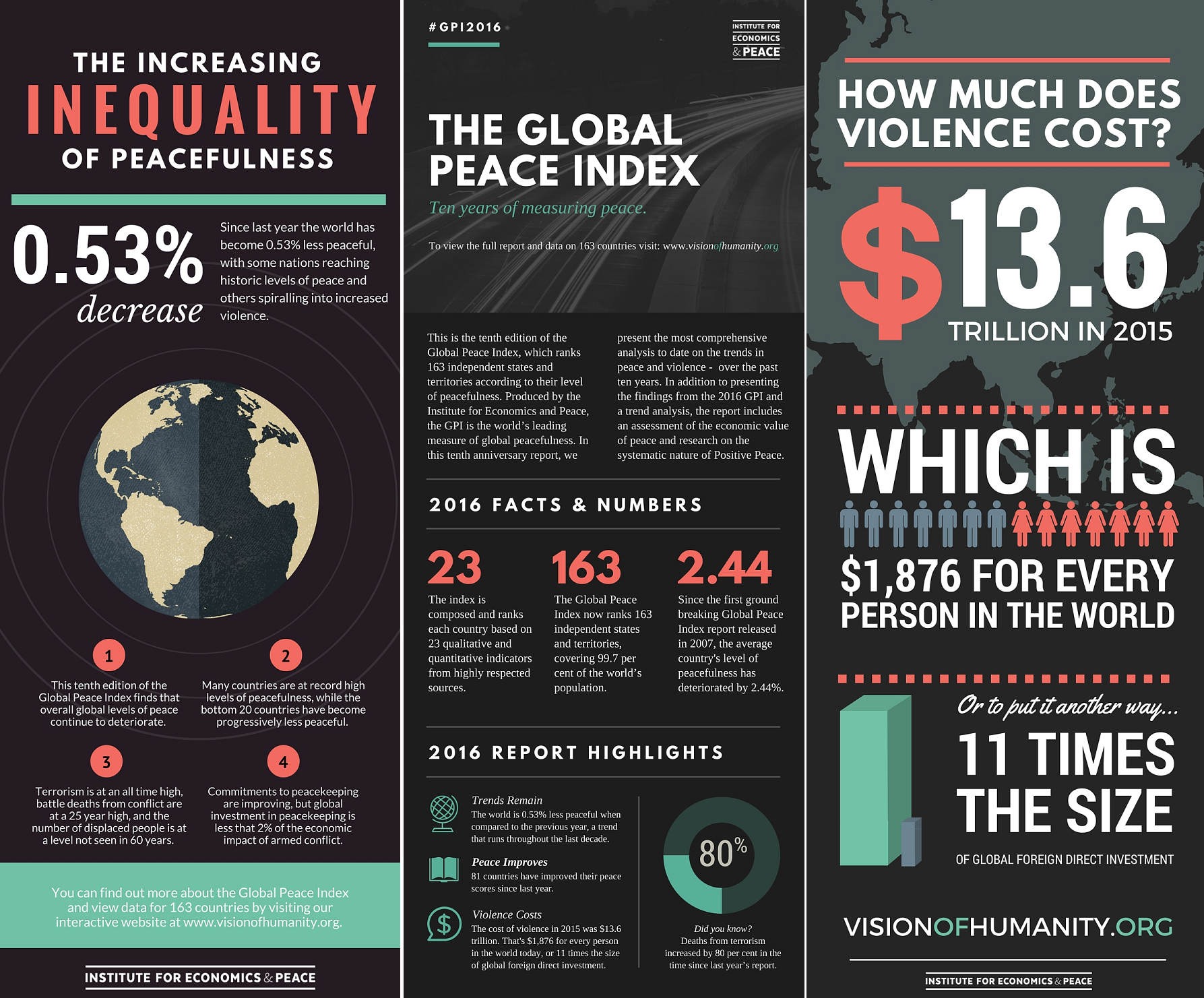 Sources: All data sources are embedded in the text, please follow these links to be redirected to original source and further information. Multimedia, tables and info-graphics all courtesy the Global Peace Index, Peace and Economics Institute.