According to the 2015 Survey of Disability, Ageing and Carers (SDAC)* there were 4.3 million Australians with a disability (18.3%). Just over half of Australians over the age of 65 reported having a disability. States or Territories with older populations recorded higher prevalence of disability. Some 5.8% of Australians had a profound or severe disability – that is, they always required assistance with core activities, in the case of the former, or, in the latter, they sometimes needed help, had difficulty being understood by friends or family, and could more easily communicate using sign-language or other non-spoken language. Of the 1.4 million people with profound or severe core activity limitations, almost half were aged 65 or older.[1] 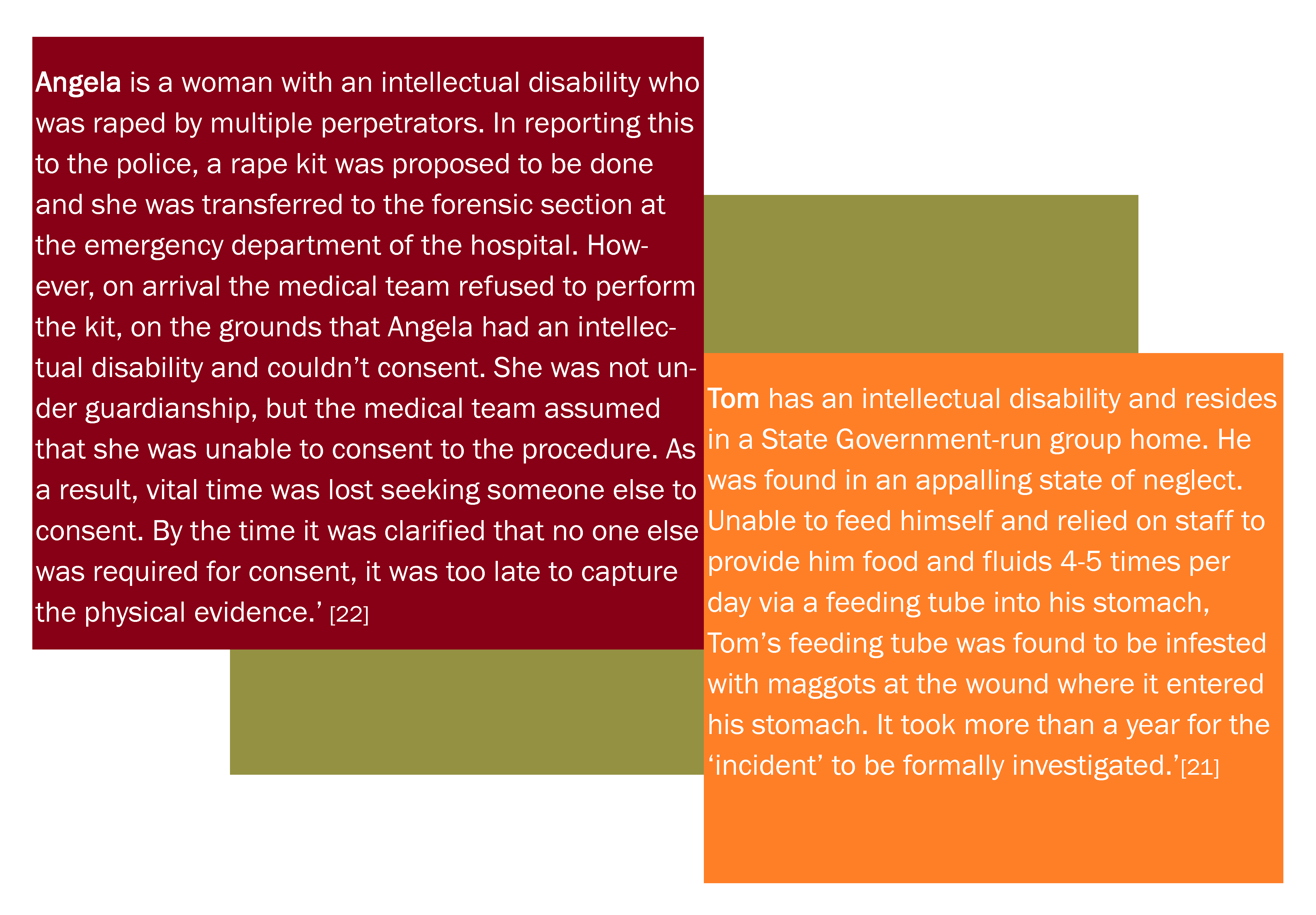 These are the kinds of stories shared during a 2015 national Senate Inquiry into the ‘violence, abuse and neglect against people with disability in institutional and residential settings’. It uncovered systemic abuse and neglect at rates ‘far higher’ than the general population.[11] In addition to this, there is growing evidence that women with disabilities experience domestic violence, both in their own private homes and in residential care facilities at a higher rate than women without disabilities. Further, research shows they often have unique experiences of domestic violence that require different responses, support and options for them to be able to leave and move on from dangerous situations. The Senate Inquiry noted the extreme dearth of data on incidents of violence, abuse and neglect and on how the reports were followed up criminally or otherwise. In the case of criminal incidents the Inquiry noted that people with disability were poorly treated, unfairly represented and generally discriminated against and too often locked out of the justice system in Australia. [12]

More than half of the submissions to the 2009 report Shut Out prepared by National People with Disabilities and Carer Council identified exclusion and negative social attitudes as major issues in their lives. They reported daily exclusion, segregation and marginalisation. At best, people said they were treated ‘differently’, as opposed to being treated negatively and with prejudice. Being denied quality and equal relationships and community participation means people become socially isolate. [13]

People with disability are painted as being ‘less than’ in Australian culture, and our lives are consequently regarded as less, and ‘other’.

Compounding the costs of unemployment are the often very high costs of living for people with disability and their families. This is because people often need increased healthcare, modifications to homes and cars, more expensive types of transport and insurance, and often also expensive health aids. This stretches already very tiny budgets for those on disability support payments. [20]

About 45% of Australians with a disability either live at or below the poverty line. This is 2.5 times the rate for the general Australian population.

*NB: In Australia, the two main survey instruments are the ABS Census and the Survey of Disability, Ageing and Carers (SDAC). The ABS also does a range of other surveys on specific aspects of disability, health, caring and ageing.

Sources: All original data is embedded in the text or footnote reference, please follow these links to be redirected to the original source or further information.