The Australian Bureau of Statistics (ABS) has been using the following definition since 2012:

When a person does not have suitable accommodation alternatives they are considered homeless if their current living arrangement:

Another common definition, often used by various Australian government departments and in the NGO sector is that there are three types of homelessness.

Often, both of these definitions dovetail and inform each other.

On the 2016 Census Night 37,715 people were experiencing homelessness in NSW, this is a 27% increase since the 2011 Census.  2 278 of this cohort were Indigenous Australians, this represents 6% of the entire homeless population in NSW though Indigenous people only represent 2.9% of NSW’s overall population. 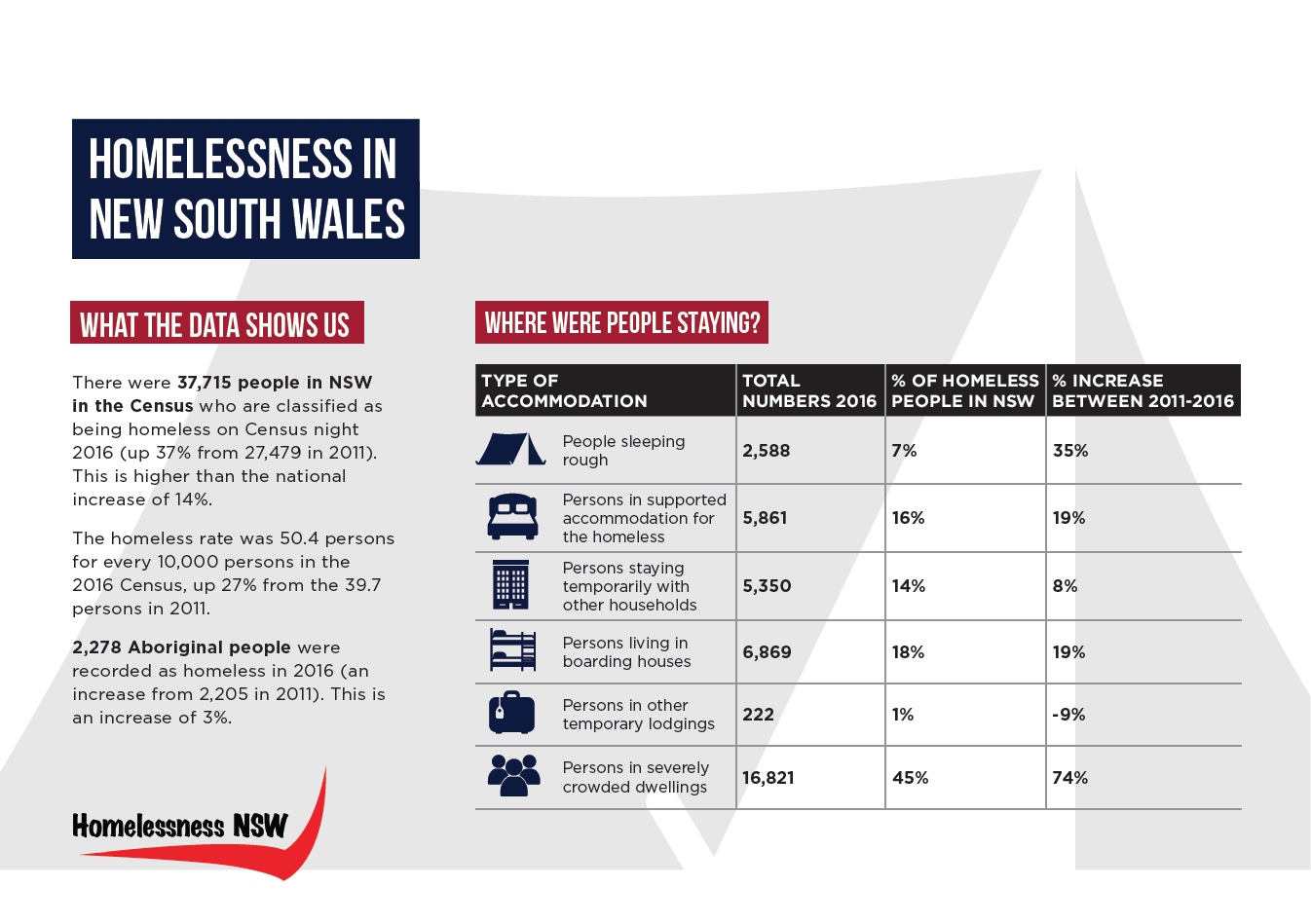 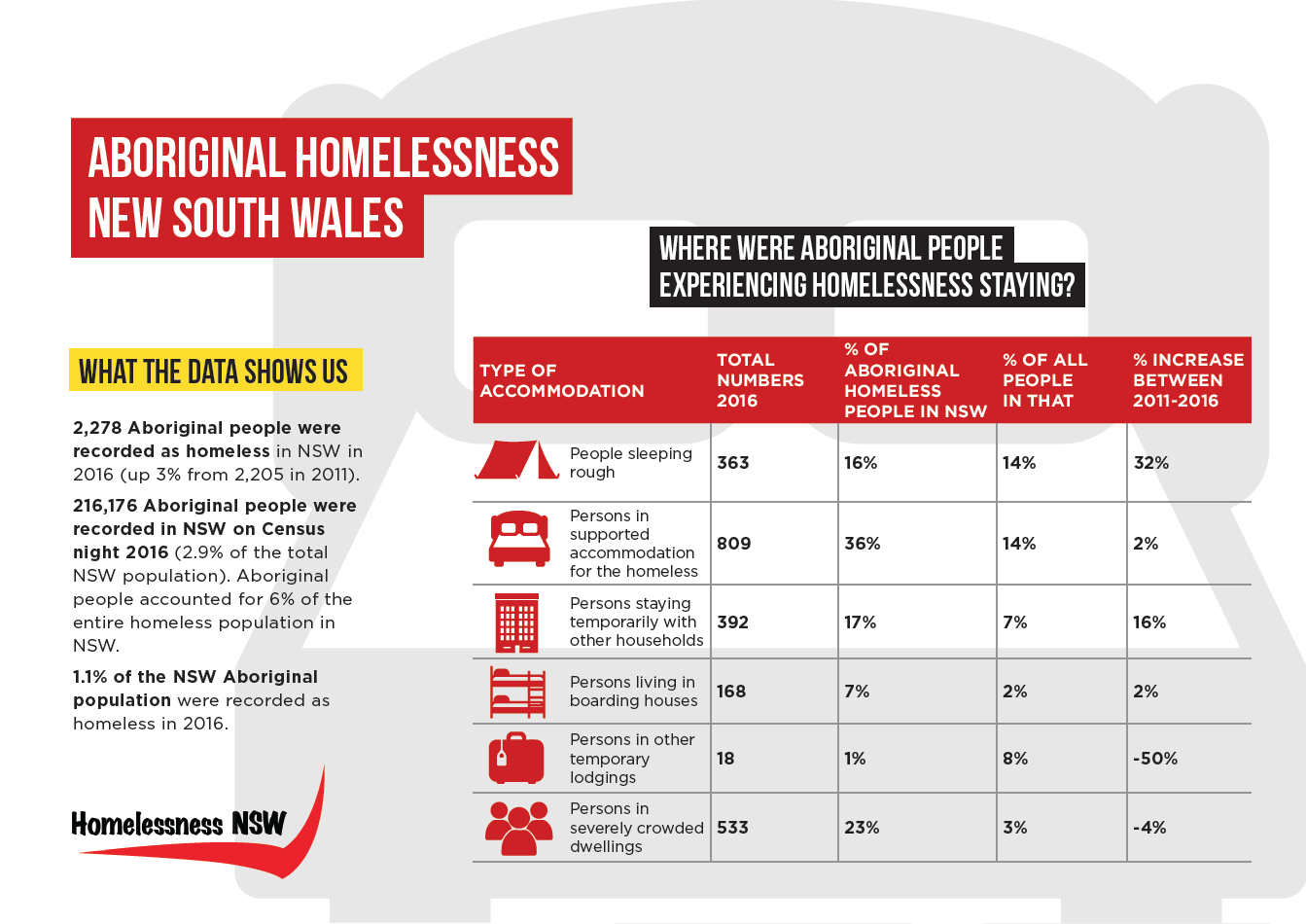 Homelessness NSW has broken down the experience of homelessness by Local Government Areas, so you can see how your council area is faring. Often, knowing what is going on in your local area makes the problem seem so much more solvable so you can realistically get some action organised that can have real impact. Check out your Council’s website for more information and any Registry Activities (these are headcounts of people experiencing sleeping rough by teams of people from councils or local organisations). Look into local homelessness and housing crisis services and see how you can get involved and be part of the solution. 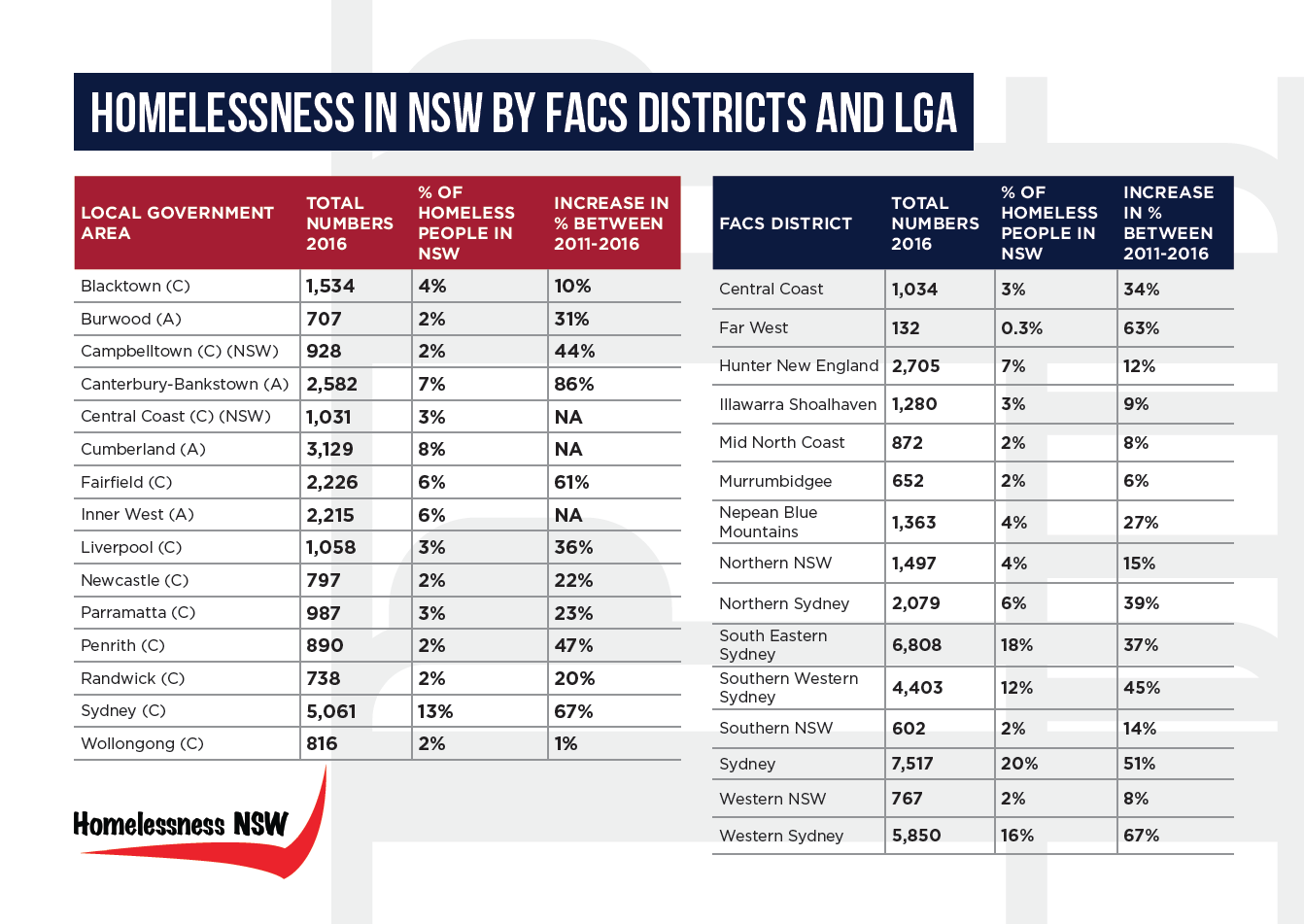 The rate of Aboriginal and Torres Strait Islander homelessness in Australia was 361 people for every 10 000 of the Indigenous population, that’s a decrease from 487 in 2011.

Most of these people (54%) were born in Australia, with the second highest group (20%) born in Asia.

Severely overcrowded dwellings are the main place of accommodation, making up 44% of the homeless population. The more visible homeless experience of sleeping rough accounts for just 7% of the people experiencing homelessness – though there has been a 20% increase in this category between 2011-2016. 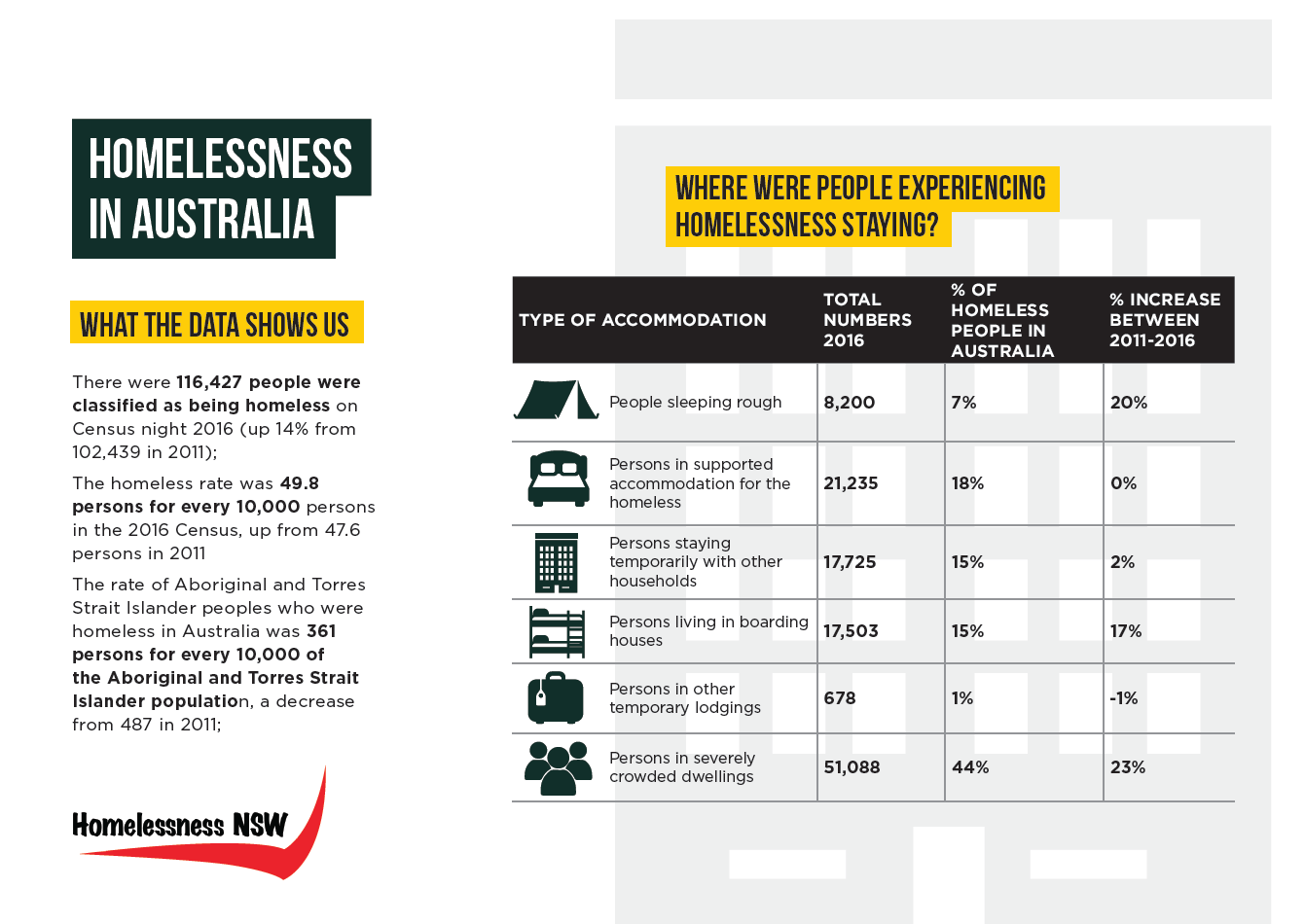 People generally experience homelessness after a sequence of related events and a mix of systemic, economic, societal, familial and personal issues. Some of the reasons people find themselves homeless include, financial difficulties, lack of adequate affordable housing, discrimination, health reasons as well as because of issues related to reintegrating into society after a custodial sentence. Domestic violence continues to be one of the major factors for homelessness, especially amongst women and children.

*Unless otherwise referenced, the figures and images in the section above are based on the 2016 Census. ABS data  can be found directly here; Infographs and corresponding data from Homelessness NSW.

Housing affordability is a key element of understanding homelessness because it is a major reason people experience homelessness but is also often central to homelessness created by domestic violence and financial difficulties. Families leaving violent situations usually need secure and affordable housing to make the separation possible, while at the same time they are often facing financial difficulties due to inability to work, and the challenges created by disrupted emotional lives, isolation and child-caring responsibilities.

That family violence and housing affordability are major issues at state and national levels also helps to explain why so many young people are homeless. The  effects of increasing rental prices, insecure work or under-employment both during and after tertiary or vocational studies as well as the effects of family violence on children’s education, capacity to gain post-school skills and long-term mental and emotional health are all major factors for homelessness across the 0-34 age bracket.[1]