In October last year the Inter-Governmental Panel on Climate Change, the IPCC, released a vital report as part of the Paris Agreements –  to keep warming to 2° and try for 1.5°   –  to give policy makers a clear sense of the differences between a 1.5° and 2° world and the different pathways to achieve the target. Ninety-one authors and review editors from over 40 countries put the report together along with thousands of experts and also input from governments around the world. The report brings together over 6000 scientific references as the IPCC doesn’t conduct its own research, but rather exists to bring the best research together to inform policy makers on what we do and don’t know about the risks associated with climate change. Given the hefty length of the report and the extensive press coverage it has been receiving we have put together a summary to give you a clearer sense of all the information behind headlines. You can find the full report here.

A suite of current options and potential options will be needed to balance lowering energy and resource intensity, rate of decarbonisation and the reliance on carbon removal. There are different challenges and trade-offs in each portfolio of choices which will need to be measured, and will be challenged, by regional, national, socio-cultural and institutional factors. Some key points from the policy recommendations section of the Report include:

Equity and Sustainability towards 1.5°

The other major section of the Report examines how the global transition can be managed effectively and equitably in a way that respects the Sustainable Development Goals, and thus protects the poorest and most vulnerable.

As mentioned above, the effects of a 1.5° or a 2° rise will affect poorer more vulnerable communities more deeply and quickly than developed countries, in this regard halting warming at 1.5° is obviously in their greater benefit, at least immediately. But mitigation and adaptation responses also have great potential to adversely affect those same communities. The measures we choose to take must take this into account and be mindful of further entrenching poverty or placing undue, unrealistic and unfair burdens on poorer countries to implement measures. An integrative, sustainable approach with low trade-offs or costs across regions and the globe is necessary. The majority of modelling of a 1.5° pathway could not construct one that did not involve international cooperation. For example, pathways that include low energy demand, low material consumption and low-intensive food consumption have an integrative element, or synergy as the Report names it, that has a low number of trade-offs in respect to sustainable development most notably in easing the burden on land use and allowing land for renewal efforts like reforestation or afforestation. Such an approach would limit the need for carbon removal technologies, help reduce inequality and poverty and help limit warming.

Developing economies that still rely on high fossil usage must be encouraged and assisted to implement energy diversification. We all must engage in redistributive policies, investments in infrastructure and technologies from national, private and multilateral sources that allow these economies to transition without the trade-off being poorer people getting more poverty, unemployment, disease, food and water shortages etc. ‘Social justice and equity are core aspects of climate-resilient pathways that aim to limit global warming to 1.5°’.

The Report makes clear that while individual consumption choices have a role to play, they will not be the key to reaching our 1.5 target. That will require national and international transformations. So one of the most important ways you can ‘care for Creation’ as our Catholic Social Teaching calls us to do, is to advocate for action on climate change at the local, state and national levels by visiting, writing and holding to account your political representatives. Consider forming or joining groups and coalitions that seek to do this. The Global Catholic Climate Movement and Catholic Earthcare Australia are good places to start your journey! 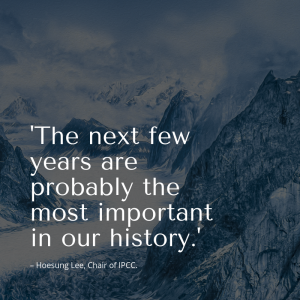