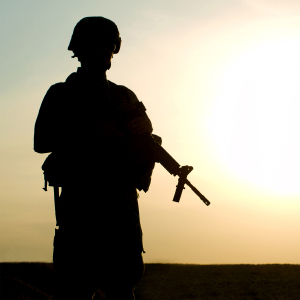 Every month, we will choose a justice and issue and provide basic information to help kick start your own judgements and actions.

To judge whether or not entering into wars are just, it is necessary to explore the principles of the Just War Doctrine, which guide our response to conflict. The Catholic Church’s teaching on this is complex. Teachings on this topic date back to the Sermon of the Mount to today with messages by Pope Francis. “Catholic teaching on peace and war has had two purposes: to help Catholics form their conscience and to contribute to the public policy debate about the morality of war.”[1] Significant documents on peace include “Pacem in Terris”, the Second Vatican Council’s expressing their stance on peace and the “The Challenge of Peace”, written by the US Catholic Bishops.

As Christians, we recognise that each person is endowed with dignity given by God. Therefore, we must strive to avoid war in order to uphold and protect humanity. In Scripture, we find the commandment, “You shall not kill”[2]. Jesus asked for peace of heart and denounced murderous anger and hatred as immoral.[3] Anger must not cause us to kill. However, although we must not love violence, we must be prepared to promote peace and not let evil prevail. In circumstances where there is a threat of evil prevailing, it may be necessary to use force. “As long as the danger of war persists and there is no international authority with necessary competence and power, governments cannot be denied the right of lawful self-defence, once all peace efforts have failed.”[4] At the core, we must recognise that we are called to peace given through the risen Christ and are encouraged to contribute to bringing peace in our world through forgiveness, love and mercy.

The Church offers strict conditions for entering into war. The Catechism of the Catholic Church outlines this in paragraph 2309:

The strict conditions for legitimate defence by military force require rigorous consideration. The gravity of such a decision makes it subject to rigorous conditions of moral legitimacy. At one and the same time:

the damage inflicted by the aggressor on the nation or community of nations must be lasting, grave, and certain;

In summary, the text reveals that one can only enter into war to counter aggression; that war should only be entered into if all other means have been proven to be ineffective; that there are serious expectations of success and that the use of arms will not be graver than the existing evil to be eliminated.

The Catechism also makes it clear that the evaluation of these conditions for moral legitimacy belongs to the prudential judgment of those who have responsibility for the common good.[5]

The weight of a decision to enter into war is grave. Serious considerations need to be assessed against our moral obligations to respect and protect life. This obligation also extends even after a war has commenced. There are teachings offered by the Church in ensuring that conduct during a war is just and moral. In the Catechism of the Catholic Church at 2312, it states, “The Church and human reason both assert the permanent validity of the moral law during armed conflict. The mere fact that war has regrettably broken out does not mean that everything become licit between the warring parties.”

Certain events have been recorded, where the innocent suffered unjustly due to brutal acts of torture, rape and murder. The Church stresses the moral illegitimacy of these actions. At 2313 of the Catechism, it explains, “Non-combatants, wounded soldiers, and prisoners must be respected and treated humanely. Actions deliberately contrary to the law of nations and to its universal principles are crimes, as are the orders that command such actions. Blind obedience does not suffice to excuse those who carry them out. Thus the extermination of a people, nation, or ethnic minority must be condemned as a mortal sin. One is morally bound to resist orders that command genocide.”

Whilst there is an obligation to ensure that entering into a war is on just terms, there are also moral obligations to persevere justice during a war. Nations must work to create peace among each other in the hope of finally arriving to a time as Isaiah explains, “shall beat their swords into ploughshares and their spears into pruning hooks; one nation shall not raise the sword against another, nor shall they train for war again.”[6] Therefore, “The Christian tradition possesses two ways to address conflict: nonviolence and just war. They both share the common goal: to diminish violence in this world” (U.S. Bishops, A Harvest of Justice is Sown in Peace).

“Blessed are the Peacemakers” (Matt 5.9)

As we continue to hear of the turmoil and conflict in countries around the world, it is often difficult to keep track of the on-going wars. Here is a list taken from InternationalRelations.com of the current wards and conflicts.

“Wars,” defined as producing more than 1,000 battle-related fatalities in the year.[7]