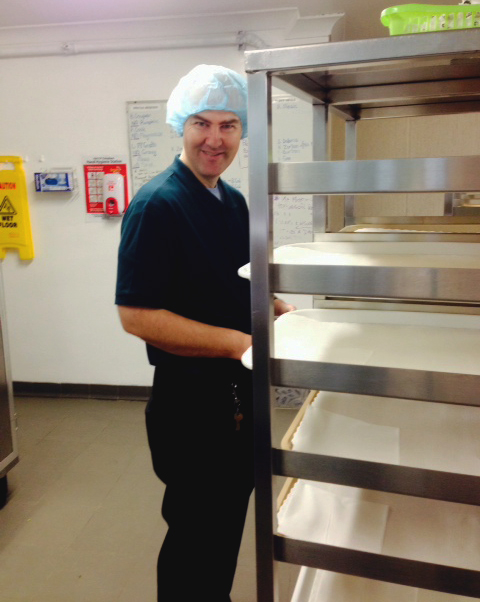 St George resident, Hamish Stewart, 41, was diagnosed with Schizophrenia 20 years ago. His condition affected his career, confidence and relationships, but an innovative collaboration between two St George area organisations has helped Hamish turn his life around.

Despite holding several qualifications, including a Certificate in Business and a cook’s apprenticeship, for years Hamish’s Schizophrenia made it difficult for him to find work, and his self-esteem suffered as a result.

“I was keen to get myself a job,” explains Hamish. “But negative thoughts that I was ‘no good’ or ‘hopeless’ led to a real lack of confidence.”

Hamish was supported by the St George Community Mental Health Service, where he was referred to CatholicCare Sydney’s disability employment service Direct Employment (DE) as part of the Vocational Education, Training and Employment (VETE) Co-Location Initiative.

Through the VETE Co-Location Initiative, Hamish pursued employment as a way to address his mental health issues. After a period of trying to match Hamish with a job he would enjoy, a kitchen hand position at a St George area aged care facility proved the perfect fit. Hamish has been employed for five months and is happier and more confident than ever.

“A lot of the time people buy into the myths about mental illness and think their situation can’t be changed,” she says. “At Direct Employment we’re working to support people like Hamish to realise they can get a job, and they can do the things they want to do.”

The Australian Bureau of Statistics (2008) reports approximately 45% of Australians experience a mental health disorder sometime in their life, and according to the South Eastern Sydney Local Health District Metal Health Clinical Services Plan 2013-18, employment rates for people with a mental illness or disorder are lower than for any other disability group.

“If you’ve got a mental illness get in touch with someone,” says Hamish. “Go to your local mental health service, support groups or an employment service like Direct Employment.

“Just getting out of a rut and doing something useful and worthwhile makes a huge difference.”

For employment support or to find out more about the VETE Co-Location Initiative call (02) 9553 1355 or visit www.catholiccare.org

Picture: Hamish is enjoying putting his skills to work as a kitchen hand