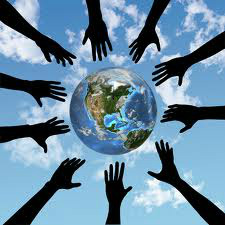 On the 15th of January, an international coalition of Catholic organisations and leaders committed to a sustainable climate future launched the Global Catholic Climate Movement (GCCM). At the launch, the group released a statement underpinned by Catholic teachings and calling for prayer and action among the world’s Catholic population to work together on climate issues. The statement was presented to Pope Francis during his recent trip to the Philippines.

The coalition is comprised of laity and clergy, theologians, scientists and activists from around the world. This is the first time such a diverse global movement of Catholics have joined forces to work together on climate issues. All are united by their Catholic faith, commitment to climate change issues and a shared sense of responsibility to care for God’s life-giving Creation. Australia is represented by Catholic Earthcare Australia, the ecological agency of the Australian Catholic Bishops Conference.

According Dr. Pablo Canziani, a climate scientist from Argentina participating in the GCCM: Conversations about the climate crisis have historically been more about intellectual arguments than about the profound spiritual and moral implications of our failure to care for God’s Creation.” The coalition hopes to highlight the spiritual and moral imperatives to act on climate change in everyday life, and encourage Catholics to support a growing international climate movement that builds towards a significant global agreement in December 2015 and beyond.

This global movement also highlights the need for Catholics to take action at a local level. Jacqui Rémond, Director of Catholic Earthcare Australia, believes all Australian Catholics have an important role to play in combating climate change.

Jacqui said: “Over 25% of the Australian population are Catholic, which means our faith-group has the power and the heart to make a real impact on climate change issues. We would like to invite all Australian Catholics to explore the issues of climate change and take action today, at this most critical time, by joining this new movement. We are all part of this fragile Earth community and so it makes sense to participate with Catholics from around the world for peace and ecological solidarity.”

The GCCM launch coincided with the trip of Pope Francis to the Philippines where he met survivors of super typhoon Haiyan (considered to be related to climate change), and takes place at a time when the Catholic community is eagerly awaiting the forthcoming encyclical on ecology.

If you are interested in joining the movement, please visit www.catholicclimatemovement.global/join-the-movement/