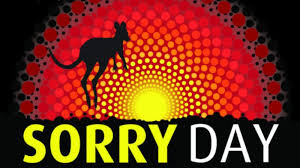 The first National Sorry Day was held on 26 May 1998 – one year after the tabling of the report Bringing them Home, May 1997. The report was the result of an inquiry by the Human Rights and Equal Opportunity Commission into the removal of Aboriginal and Torres Strait Islander children from their families.

The public and political debate about the removal of children was marked by intense political activity since the mid-to-late 1980s. In 1992 Prime Minister Keating acknowledged that ‘we took the children from their mothers’ at a speech in Redfern. In 1994 legal action was commenced in the Supreme Court of New South Wales. These children who were removed came to be known as the Stolen Generations.

A huge range of community activities took place across Australia on Sorry Day in 1998. Sorry Books, in which people could record their personal feelings, were presented to representatives of the Indigenous communities. Hundreds of thousands of signatures were received. People could also register an apology electronically. You can view the 24,763 apologies to Australia’s indigenous people made at Apology Australia.

On Sunday 28th May 2000 more than 250,000 people participated in the Corroboree 2000 Bridge Walk across Sydney Harbour Bridge. This walk was in support of Indigenous Australians and was organised by the Council for Aboriginal Reconciliation (now known as Reconciliation Australia), a Federal Government initiative to promote greater understanding between Indigenous and non-Indigenous Australians. The event highlighted the issue of a lack of an apology by the Commonwealth Government to the Stolen Generations.

Sorry Day is an annual event, with marches, speeches and presentations being held through the country.

For more information, and how to get involved visit: http://www.australia.gov.au/about-australia/australian-story/sorry-day-stolen-generations