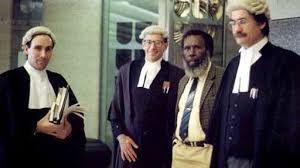 This year marks 25 years since the HIgh Court of Australia’s judgement in 1992 in the Mabo case.

The Mabo Case was a significant legal case in Australia that recognised the land rights of the Meriam people, traditional owners of the Murray Islands (which include the islands of Mer, Dauer and Waier) in the Torres Strait. The Mabo Case challenged the existing Australian legal system from two perspectives:

On 3 June 1992, six of the seven High Court judges upheld the claim and ruled that the lands of this continent were not terra nullius or ‘land belonging to no-one’ when European settlement occurred, and that the Meriam people were ‘entitled as against the whole world to possession, occupation, use and enjoyment of (most of) the lands of the Murray Islands’.

In Mabo v. Queensland (No. 2), judgments of the High Court inserted the legal doctrine of native title into Australian law. The High Court recognised the fact that Indigenous peoples had lived in Australia for thousands of years and enjoyed rights to their land according to their own laws and customs. They had been dispossessed of their lands piece by piece as the colony grew and that very dispossession underwrote the development of Australia as a nation.

The new doctrine of native title replaced a 17th century doctrine of terra nullius on which British claims to possession of Australia were justified on a wrongful legal presumption that Indigenous peoples had no settled law governing occupation and use of lands. In recognising that Indigenous peoples in Australia had prior rights to land, the Court held that these rights, where they exist today, will have the protection of the Australian law until those rights are legally extinguished.

The High Court decision in the Mabo v. Queensland (No.2) altered the foundation of land law in Australia and the following year the Native Title Act 1993 (Cth), was passed through the Australian Parliament. This opened the way for claims by Aboriginal and Torres Strait Islander peoples to their traditional rights to land and compensation. With Eddie as the first named plaintiff, the case became known as the ‘Mabo Case’.

Effects of the case

There were five key issues of importance to legal precedent in the Mabo decision for the recognition of Indigenous peoples’ rights in Australia:

The Mabo decision and the legal uncertainty that followed prompted a legislative response. By the end of 1993 the Native Title Act 1993 (Cth) was passed. The NTA sought to achieve four main objectives: