Humans Are Not For Sale 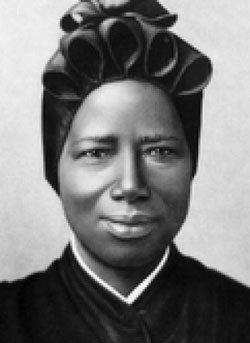 Pope Francis has declared the feast of St Josephine Bakhita, 8th February, to be the International Day of Prayer Against Human Trafficking. Josephine Josephine Bakhita was born in 1869, in a small village in the Darfur region of Sudan. She was kidnapped while working in the fields with her family and subsequently sold into slavery.  In her later life after she had been freed she was known to have said  “If I were to meet the slave-traders who kidnapped me and even those who tortured me, I would kneel and kiss their hands, for if that did not happen, I would not be a Christian and Religious today.” Her story reminds us of the trauma and loss of dignity endured but ever trafficked person. As we mark her feastday let us pray that we will be able to work against this crime against the dignity of the person.

Australian Catholic Religious Against Human Trafficking (ACRATH) have a range of resources for individuals, families, groups and parishes to help in celebrating the day. http://acrath.org.au/6509/world-day-of-prayer-against-human-trafficking/; St Bakhita Day News Release