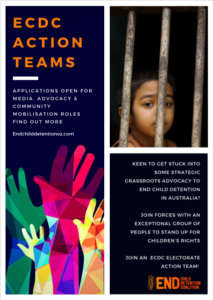 Want to do something to help bring about positive change for refugees and asylum seekers? The End Child Detention Coalition is looking for Electorate Action Team volunteers. There are a range of roles and options to get involved.

The ECDC is currently made up of 23 member organisations from across Australia, amongst which there is a total of 150 staff, around 1,100 volunteers and approximately 120,000 supporters across all States and Territories.

Collectively, these organisations possess a wealth of experience in policy and advocacy, as well as years of experience working effectively together. The End Child Detention Coalition advocates for the release of children from immigration detention and takes the position that detention is never in the best interests of a child.

Our membership reflects a diverse cross section of Australia’s civil society. The coalition also has collaborative partnerships with many organisations based both in Australia and overseas.