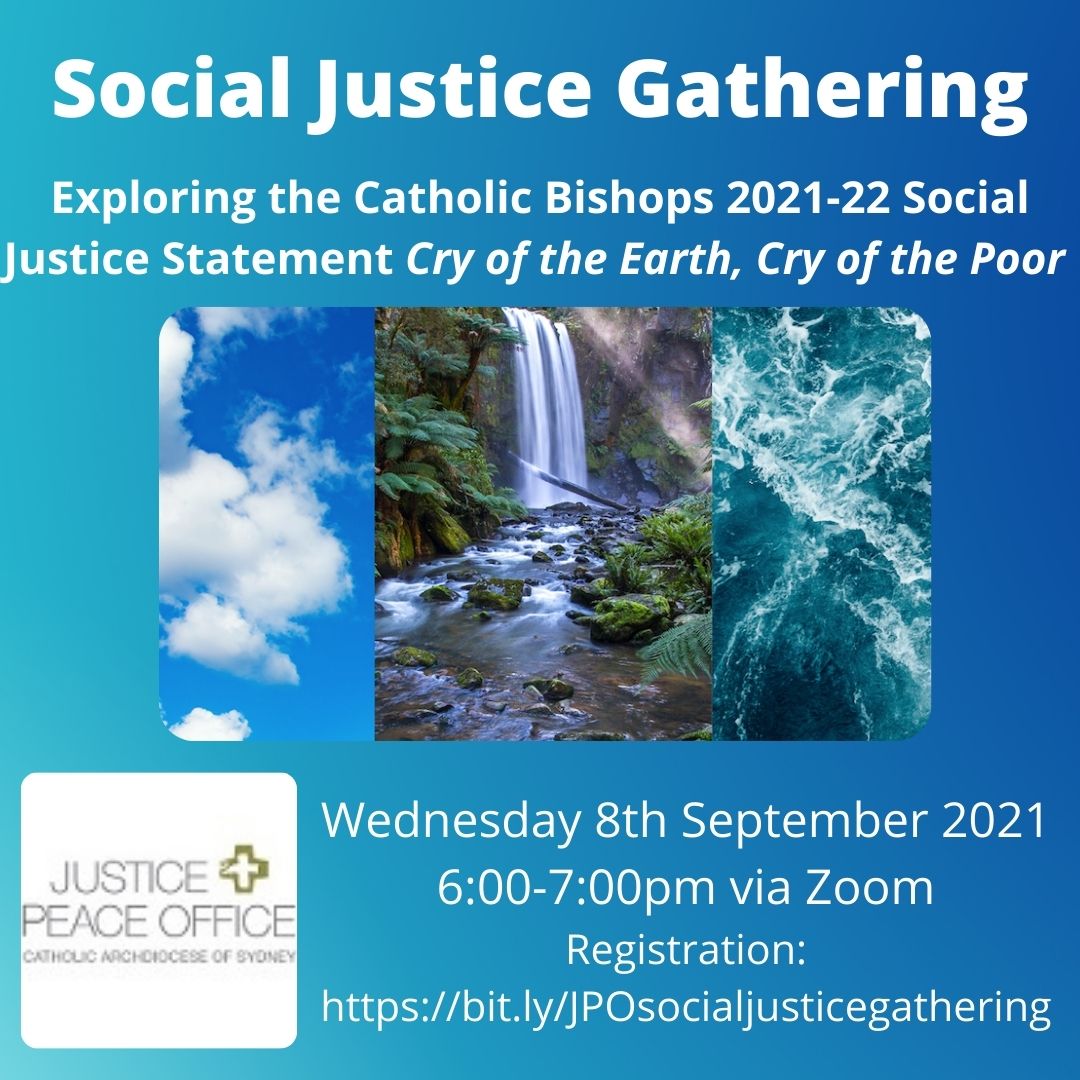 We celebrated Social Justice Sunday on the 29th of August which kicks off an entire year dedicated to the Australian Catholic Bishops Conference 2021-22 social justice statement, Cry of the Earth, Cry of the Poor. The title and theme are a timely and ever needed reminder of Pope Francis’ words in Laudato Si’ that everything is connected and that concern for the environment needs to be joined to a sincere love for our fellow human beings and an unwavering commitment to resolving the problems of society. (Laudato Si’, 91)

The timing of this statement is particularly important as all Australians have recently seen the devastating impact of climate change through drought, catastrophic bushfires, heatwaves and once in a century floods.

In the Cry of the Earth, Cry of the Poor the Bishops said: “We stand with Pope Francis in acknowledging that ‘a very solid scientific consensus indicates that we are presently witnessing a disturbing warming of the climatic system’ and that ‘humanity is called to recognise the need for changes of lifestyle, production and consumption, in order to combat this warming or at least the human causes which produce or aggravate it’ “. (Cry of the Earth, Cry of the Poor, 12 citing Laudato Si’ 23). In releasing the statement, the Australian Catholic Bishops Conference also committed to its implementation in three steps. One of those steps is by embarking on a seven-year journey towards the Laudato Si’Goals articulated by the Dicastery for the Promotion of Integral Human Development’s Laudato Si’ Action Platform.

In August, just after the Social Justice Statement had been released, the Intergovernmental Panel on Climate Change released its Sixth Assessment Report “Climate Change 2021: The Physical Science Basis”. One of its first statements was:  “It is unequivocal that human influence has warmed the atmosphere, ocean, and land. Widespread and rapid changes in the atmosphere, ocean, cryosphere and biosphere have occurred.” (Summary for Policymakers, page 6). The report reiterated that many of the changes observed in the climate are unprecedented, and some of the changes already set in motion are irreversible. It continued to detail the devasting impact of climate change around the world and the danger of not taking immediate action. The Secretary General of the United Nations, Antonio Guterres called the report a “code red” for humanity.

Everyday we see more evidence of how deteriorating environments lead to other social crises. Extreme heat in certain places such as Western Sydney makes it difficult for students to concentrate in school leading to diminished learning capacity. The heat also makes it unbearably hot for adults to exercise or children to play in playgrounds where the surface temperatures can be between 80-100°C. One of the most serious consequences of this is that extreme heat leads to premature deaths. In other countries rising sea levels and diminished harvest yields have meant that people have had to flee their homelands to the degrading environment. Taking this into account, earlier this year the Vatican issued the Pastoral Orientations on Climate Displaced People. Sadly, it is the poor who bear the brunt of these consequences.

The Australian Catholic Bishops, the Intergovernmental Panel on Climate Change and the UN all echo Pope Francis urgent call to protect our common home. As a further imperative to Catholics to care for creation, earlier this year Pope Francis launched the Laudato Si Action Platform which invites families, parishes and dioceses, schools and universities, businesses and farms, religious congregations, and healthcare facilities to start a seven year journey towards integral ecology.

The Season of Creation which is a call to prayer and action for caring for our environment and the poorest sisters and brothers of our human family began on the 1st of September.  The ecumenical initiative ends on the 4th of October, the feast of St. Francis of Assissi who exemplified caring for creation and the poor. While the problem of climate change seems to large and frustrating especially in the face of Government inaction we should never give up “for we know that things can change” (Laudato Si’ 13). While we maintain our advocacy for better policies for the planet and the poor, we should also do what we can in our neighbourhood to create a better environment both physically and socially.

The Justice and Peace Office is hosting an online Social Justice Gathering to delve more into the themes of the statement and explore ideas for action on Wednesday 8 September 2021 at 6:00pm. To register, please click here.