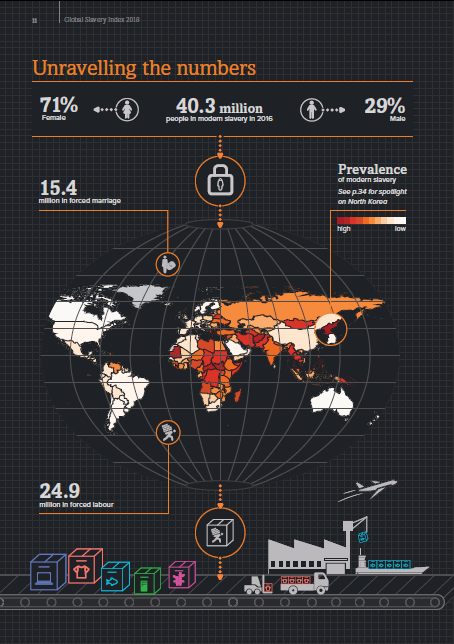 What is “Modern Slavery”?

Modern slavery is a broad term that encompasses a number of unethical practices such as slavery or forced labour (including child labour), debt bondage, slavery like practices, servitude, deceptive recruiting, forced marriage, prostitution, organ trafficking and human trafficking. Modern slavery is different to historical forms of slavery, especially what is referred to as “chattel slavery”, in which it was legal in many jurisdictions for one human being to own another human being outright, to buy, sell or inherit that human being, to exploit him or her or deprive that person of life, without any repercussions for the person who harmed them. Chattel slavery and the slave trade are now illegal in every country in the world and under international law (Article 4 of the Universal Declaration of Human Rights). However, estimates say there are more people trapped in conditions of modern slavery today than there were slaves, even when slavery was legal.

What is human trafficking?

Trafficking in humans is the equivalent of the modern day slave-trade. The UN defines “Trafficking in persons” as the “recruitment, transportation, transfer, harbouring or receipt of persons, by means of the threat or use of force or other forms of coercion, of abduction, of fraud, of deception, of the abuse of power or of a position of vulnerability or of the giving or receiving of payments or benefits to achieve the consent of a person having control over another person, for the purpose of exploitation” (Article 3(a) of the Protocol to Prevent, Suppress and Punish Trafficking in Persons Especially Women and Children, supplementing the  United Nations Convention against Transnational Organized Crime).  Exploitation includes prostitution or other forms of sexual exploitation, forced labour or services, slavery or practices similar to slavery, servitude or the removal of organs. Trafficking can occur within one’s own country or across international borders. Almost all the people who are trafficked end up in situations of modern slavery.

What is the situation in New South Wales?

In 2018, the New South Wales Parliament also passed the Modern Slavery Act 2018 (NSW). It requires companies that have revenue over $50 million (AUD) a year to report on the risks of modern slavery in their supply chains and there are strong fines for not complying with this requirement. The NSW Act also provides for an Anti-Slavery Commissioner with wide ranging powers to advocate for and promote action to combat modern slavery. However, the NSW Act has not yet entered force and is currently under Parliamentary review with the Committee expected to table its report in late March 2020.

What is the situation in Australia?

Slavery, human trafficking and related practices such as servitude, forced labour, deceptive recruiting, trafficking in persons, debt bondage and organ trafficking are illegal in Australia under the Divisions 270 and 271 of the Criminal Code (found in the Schedule to the Criminal Code Act 1995). Despite it being illegal, the Global Slavery Index estimates say that there are approximately 15 000 people living under conditions of modern slavery in Australia in 2018 and because of the clandestine nature of the activity, the real numbers are probably much higher. Despite the illegal nature of slavery, convictions are rare. Between 2004-2018 the Commonwealth Director of Public Prosecutions only prosecuted 19 people for slavery related offences.

The Archdiocese of Sydney’s Anti-Slavery Taskforce has provided a handy summary of the comparision between the federal act and the NSW Act, here.

What is the situation globally?

The Global Slavery Index 2018 estimates that there were 40.3 million people trapped in modern slavery around on any given day in 2016. Ten million of them are considered to be children and 71% of everyone trapped in modern slavery is a woman or girl. They estimate that 24.9 million people are trapped in forced labour and 15.4 million people are trapped in forced marriages. The sad reality is that as with many clandestine activities, the true numbers are probably much higher. Modern slavery and human trafficking are incredibly lucrative transnational criminal industries. In 2014, the International Labor Organisation estimated that forced labour including generated $150 billion US Dollars in revenue for the perpetrators.

The international community has recognised the prevalence of modern slavery and its dangers and has therefore included Target 8.7 as one of the Sustainable Development Goals (SDG). Pope Francis was a key instigator in getting the goal of eradicating modern slavery included in the SDGs.

Target 8.7: Take immediate and effective measures to eradicate forced labour, end modern slavery and human trafficking and secure the prohibition and elimination of the worst forms of child labour, including recruitment and use of child soldiers, and by 2025 end child labour in all its forms

To implement Target 8.7, Alliance 8.7 has formed. Alliance 8.7 is a global partnership fostering multi-stakeholder collaboration to support governments in achieving Target 8.7 by 2030. Alliance 8.7 is tasked with promoting accelerated action to eradicate forced labour, modern slavery, human trafficking and child labour; research, data collection and knowledge sharing on prevalence and “what works”; and driving innovation and leveraging resources. There are a number or key groups that are working to combat modern slavery both in Australia and around the world. To find out more about them visit our page here.

Why are they such big problems right now?

Human trafficking and modern slavery have become a more serious problem in recent years because of governments and non-governmental organisations clamping down on the illegal sales of arms and drugs. Traffickers have discovered that instead of selling arms and drugs once, human beings can be sold over and over again, making them more profit.

These unethical  practices enable people to be controlled, exploited and deprived of their innate dignity and freedom and are complex and entrenched problems that degrade our human family in a multitude of ways.  While the Catholic Church (particularly religious congregations) has long been working to end trafficking and slavery and alleviate the suffering caused by such exploitation, Pope Francis is renewing and reinvigorating the Church’s efforts. He has raised his voice against the growing ‘throw-away’ culture giving rise to slavery and trafficking.

Today, as in the past, slavery is rooted in a notion of the human person which allows him or her to be treated as an object. Whenever sin corrupts the human heart and distances us from our Creator and our neighbours, the latter are no longer regarded as beings of equal dignity, as brothers or sisters sharing a common humanity, but rather as objects. Whether by coercion or deception, or by physical or psychological duress, human persons created in the image and likeness of God are deprived of their freedom, sold and reduced to being the property of others. They are treated as means to an end.

The innate dignity of each and every person and our shared equality as brothers and sisters in Christ are principles we can easily recognize as Catholics. Yet, when we participate in a culture or economy that makes people into objects or commodities to be used and thrown away, we are allowing people’s innate dignity to be dismissed in favour of a monetary value.  This tendency is compounded by society’s preoccupation with money, financial gain and profit maximisation.  The downside to this skewed culture is the consequent poverty, underdevelopment and exclusion that is prevalent globally.  The desperate situation of people in extreme poverty, particularly where they may be lacking in education, makes them vulnerable to exploitation. Corrupt people facilitate and condone the exploitation of others and deception and violence (or the threat of violence) enforces compliance with those who exploit.

Various forms of exploitation or subjugation are of concern.  Countries may fail to comply with international norms or standards regarding the treatment of labour in industries such as agriculture, mining or manufacture or otherwise poorly protect workers in practice.  For example, relevant laws may exist but they may not be effectively enforced.  Migrants may be inhumanely detained or abused or migrant workers (as distinct from citizens of a country) may live or work in degrading conditions.  Prostitution, sex-slavery and forced marriage is also of grave concern.  People may be forced into other illegal activities, such as: the sale of organs; recruitment as soldiers or otherwise used for the purposes of militia; thieving or begging; the sale of children; production, distribution or sale of illegal items.   In addition, such exploitation can take place as a result of a process of trafficking victims.  Traffickers may recruit or procure, harbour or transport people, either forcing, coercing or defrauding them so they travel to a different location where they are exploited once they arrive at their destination.

Trauma and loss are likely suffered as a result of such exploitation and this suffering may deleteriously impact victims long after the experience of slavery or trafficking has ceased.  It may also impact the lives of their families and, particularly their children, contributing to a tragic intergenerational spiral of degradation.

How does human trafficking or modern slavery affect me?

Even for those of us who are not directly involved in trafficking in persons or exploiting people under conditions of modern slavery, we may still be contributing to trafficking or modern slavery through the goods and services we purchase.

Despite popular perception, the most common form of modern slavery is forced labour, and not forced prostitution or sexual exploitation. Many of the items that can be purchased for extremely low costs such as clothes, shoes, tea, coffee and chocolate may well be produced by people who are trafficked and then forced to work in exploitative situations. In terms of services, beauty salons, restaurants and cafes, carwashes, fruit-picking and construction are some of the most common industries tainted by modern slavery.  The vast majority of people who appear in pornographic videos are people who have been trafficked. To try eliminate forced labour and undignified working conditions, we all need to be more careful about investigating the supply chain of the goods and services we purchase. Both the Vatican and the Catholic Archdiocese of Sydney have committed to the formidable task, as far as possible, to eliminate modern slavery from their supply chain of purchases.

It is good for people to realize that purchasing is always a moral — and not simply economic — act. Hence the consumer has a specific social responsibility, which goes hand-in- hand with the social responsibility of the enterprise. Consumers should be continually educated regarding their daily role, which can be exercised with respect for moral principles without diminishing the intrinsic economic rationality of the act of purchasing.

Our faith requires us to intervene, to take steps in favour of those who are currently exploited and to prevent others from entering slavery or being trafficked.

We ought to recognize that we are facing a global phenomenon which exceeds the competence of any one community or country. In order to eliminate it, we need a mobilization comparable in size to that of the phenomenon itself. For this reason I urgently appeal to all men and women of good will … not to become accomplices to this evil, not to turn away from the sufferings of our brothers and sisters, our fellow human beings, who are deprived of their freedom and dignity.

The globalization of indifference, which today burdens the lives of so many of our brothers and sisters, requires all of us to forge a new worldwide solidarity and fraternity capable of giving them new hope and helping them to advance with courage amid the problems of our time and the new horizons which they disclose and which God places in our hands.

This page was last updated in March 2020